When Kelly Ashton’s parents found a prime plot of land resting atop Signal Mountain, they weren’t aware it would turn into the perfect place to put down generations of family roots. Fast-forward several months and Kelly, alongside husband Matt, had finished building a home right next door to her parents – a home where their children would be free to grow and play while being able to nurture family relationships.

“My parents found this land and started building a house on it,” explains Kelly. “After a few trips to the site, I started thinking, ‘How awesome would it be if the kids could just get off of the school bus and go to grandma and grandpa’s house if they wanted?’”

The Ashtons got to work building their own house, and the end result was a farmhouse-inspired abode that is as cozy and inviting as it is spacious and functional. Approaching the home’s stately exterior, guests are greeted with an expansive front porch, providing a nod to the farmhouse aesthetic. Intimate seating arrangements dot the space and are primed for conversation. A couple of white rocking chairs are tucked into a corner, while two sets of wooden Adirondack chairs, made by Matt himself, bookend the home’s entryway.

The deep wood grains found in the furniture play off of the wooden French doors, which are flanked by sidelights. Adding to the warmth is the natural stone that lines the front of the porch and surrounds the front door.

“We really wanted a lot of outdoor space where the kids could play and be outside,” says Kelly. “That was important to us, and this space has been great because we can sit out here and relax as we watch the kids run around the front yard.” Stepping into the home, the farmhouse style that influenced the exterior gives way to one that’s much more transitional. Just feet from the entryway is the living room, and a sleek gray sectional and leather armchair provide plenty of seating. An elegant drum shade hangs overhead, and recessed fixtures found in the tray ceiling provide even more light. Two wooden beams run the length of the room and match the mantel, which caps a stone fireplace. A flat-screen TV rests in front of a wainscoting detail, and a custom built-in to the right provides both storage and open shelving where the Ashtons can display a hint of personality.

“In the process of selling our last home, we pared down a lot of our stuff and realized that we liked it that way,” explains Kelly. “We just wanted something clean but still cozy without being overly so.” 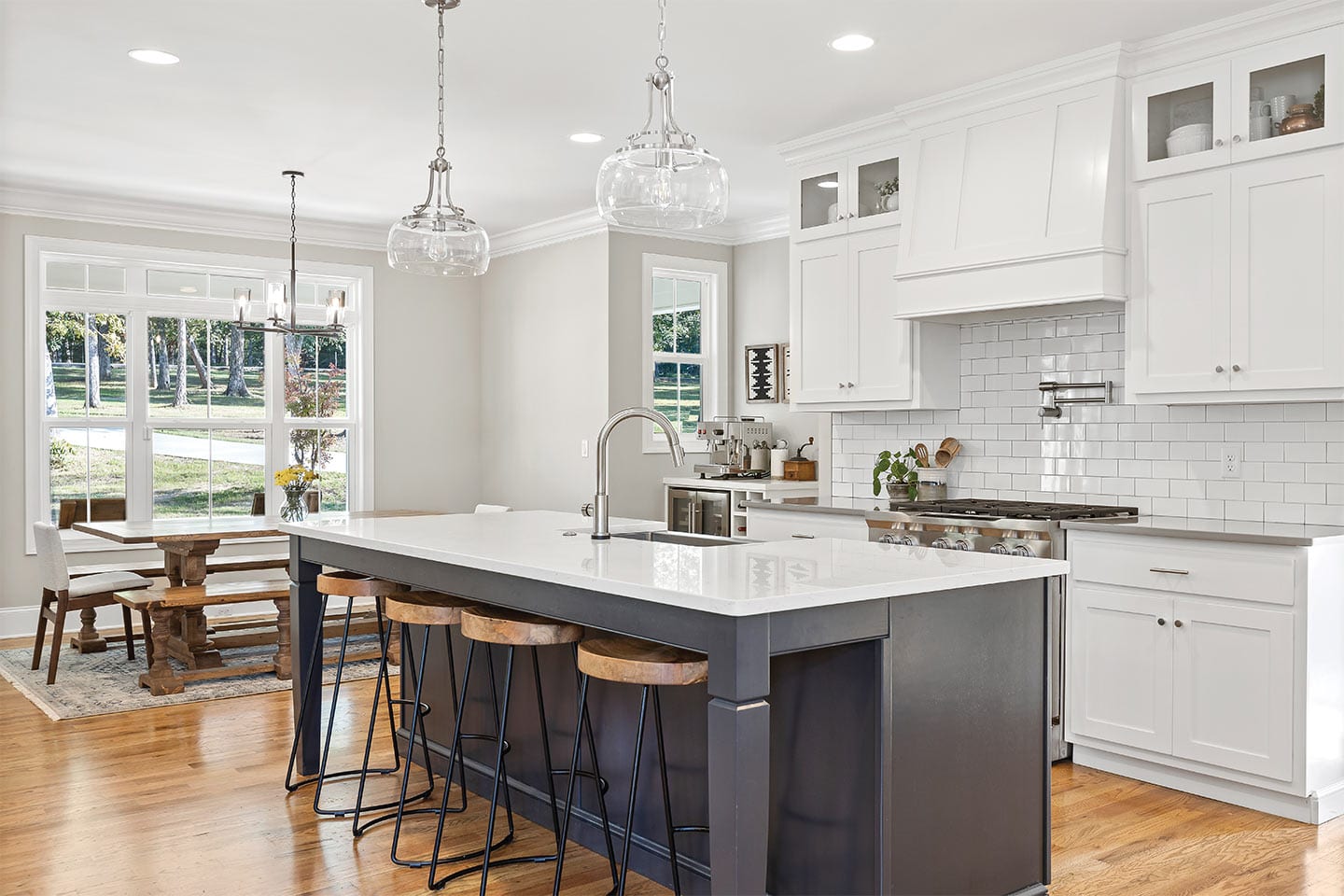 Open to the living room is the home’s kitchen. The dark gray cabinetry of the island grounds the otherwise bright and vivacious space. Four backless barstools are neatly tucked under an overhang supported by two furniture-style legs.

The white quartz countertop that cloaks the island is complemented by gray countertops of the same material that run along the kitchen’s perimeter, both of which offer up a durable and functional workspace. White wall cabinetry is accentuated by a white subway tile backsplash. Chrome fixtures and stainless-steel appliances match the cabinetry hardware and work to maintain a streamlined atmosphere.

Appliance bays on either side of the refrigerator, as well as a walk-through pantry, keep clunky items out of the way and off the counters.

Matt and Kelly Ashton with children Kai, Abby, and Barrett

“This table is a great example of us really looking for functionality. I don’t spend any time cleaning a bunch of spindles. Instead, I can wipe down the benches and scoot them in in a matter of minutes.” Adjacent to the kitchen is the family’s dining room, which reinforces the faint farmhouse ambiance with its use of furniture. Here, a long wooden table offers ample space with benches on either side and fabric-covered chairs at the heads.

“This table is a great example of us really looking for functionality,” says Kelly. “Now I don’t have to constantly move chairs that are strewn about the room, and I don’t spend any time cleaning a bunch of spindles. Instead, I can wipe down the benches and scoot them in in a matter of minutes.” A pendant chandelier hangs overhead and carries the steel tones seen in the kitchen into the space. Even more steel can be found at a nearby drink station that caters to coffee connoisseurs and beer buffs alike. This area of the home allows guests and family members to grab a refreshment without getting in the hustle and bustle of the kitchen. The red oak hardwood flooring found throughout the common spaces carries visitors past the entryway and down the hallway to the master suite. A window on the far wall lets in its fair share of light, helping keep the space airy and tranquil, while a large weeping fig tree and a thick floating wooden mantel bring in some natural elements. An elongated fireplace delivers a dose of warmth, and the same Repose Gray walls found throughout the rest of the main floor wrap the room. “We really like neutrals, and it’s been nice to have one color on the main level because it makes touch-ups a breeze,” says Kelly.

In the adjoining en suite, farmhouse elements once again emerge. White shiplap walls add visual interest to the room, which is built upon with herringbone-tiled floors. Pops of matte black are integrated throughout the space, and another touch of color is added with gray granite countertops. 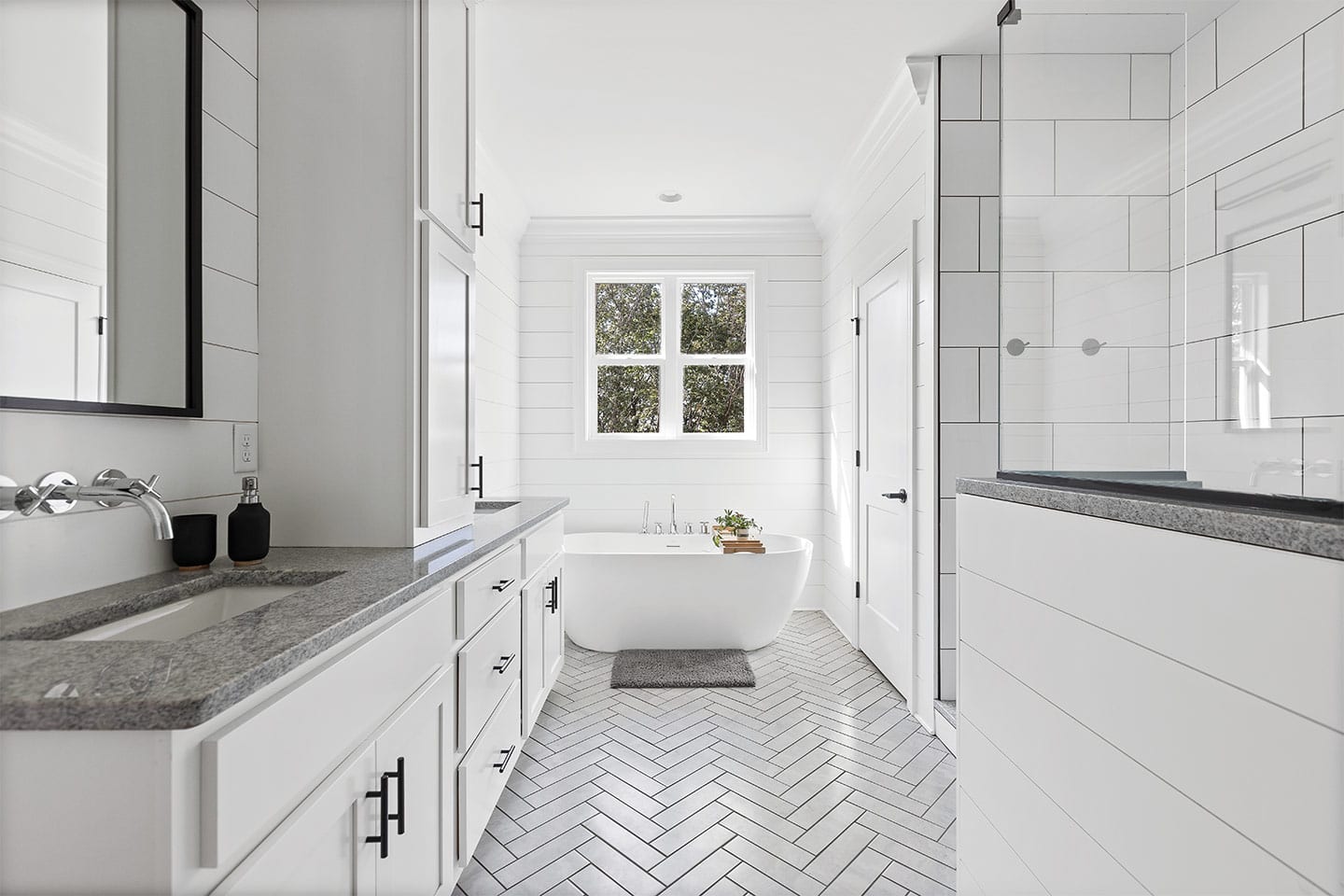 A freestanding tub rests under a window and provides a peaceful place to unwind, while a large walk-in shower features an array of relaxing shower heads.

“The plans originally called for there to be a makeup table here, but since I wouldn’t really use that, we decided to incorporate a wet space,” explains Ashton. “It helps keep things clean and from getting water everywhere.”

From building a wet space to purchasing wipeable furniture, the Ashtons have prioritized durability and ease of use in their new home. With constant cleaning and managing messes a thing of the past, this family of five can focus on what’s really important – each other. CS Riverview is a tree-lined oasis just minutes away from Chattanooga’s best dining, culture, schools, and shopping, and this stately home Read more Two acres of gorgeous lakefront property inviting all who enter to relax, unwind, and soak up the serene setting.