When Forrest’s parents Mitch and Fran Simmons purchased the estate from the ChantecilleHedges in 1985, they inherited a home rich in French history, architecture, and aesthetics. 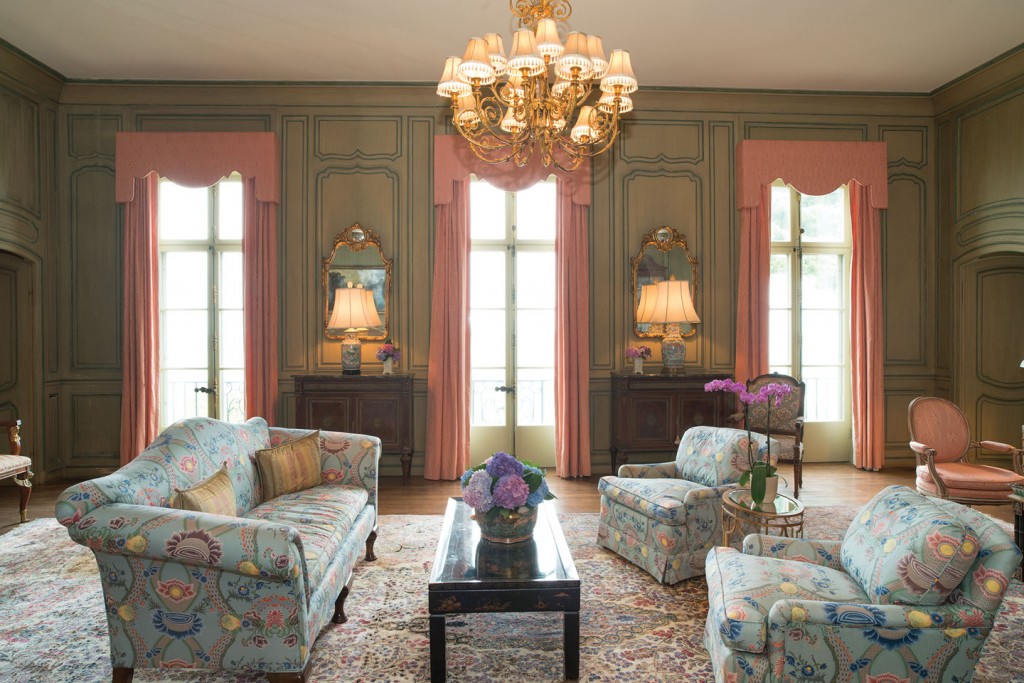 The story of this house begins with its original owners, Dot and Jim Hedges,” says Forrest Simmons, as he sits with his wife Penny in the family room of his late parents’ home. “Dot’s grandfather was awarded the Medal of Honor by Napoleon III and she traveled extensively throughout France,” Forrest explains. Later, Dot’s deep affinity for her French ancestry would lead her to hire the very best architects, artisans, and craftsmen to construct this authentic – if smaller – replica of the Chateau Chantecaille in Touraine, France. When Forrest’s parents Mitch and Fran Simmons purchased the estate from the Hedges in 1985, they inherited a home rich in French history, architecture, and aesthetics.

Entering through the front door, guests meet with a sense of both grandeur and ease in the foyer. Overhead, an 18th century crystal chandelier, believed to be Baccarat, glistens in the sunlight, while below, four types of marble – Sienna, Cipollino, Verde Antique, and Rouge Royal – were assembled into a unique mosaic. Forrest explains that the marble was mined outside of Florence, Italy, and cut according to the home’s floor plan before being shipped directly to the house.

To the left and right of the foyer, two alcoves house wall panels with extraordinary historical significance. Created by French artist Joseph Dufour in 1820, the panels were extracted from a 7×75 foot vignette consisting of 43 21-inch wide panels depicting the passage of Telemachus. Only four pieces of the original vignette exist – two of the others are on display in the Hermitage and the Cooper-Hewitt, Smithsonian Design Museum.

Directly beyond the entryway, the drawing room has a breathtaking view of rolling mountains and hills crossing three states – Tennessee, Alabama, and Georgia. Louis XVI paneling and molding evoke an epoch long past. “The paneling was taken from a Parisian townhouse built in 1775,” Forrest explains. Now restored, refurbished, and cut to fit the room, it retains its original soft green hue. The room’s Period Louis XV fireplace is made from blue and white Saint Anne’s marble.  Above is a trumeau mirror, also acquired from the townhouse in Paris.

To the right is the formal dining room, once used for grand dinner parties held by the elder Simmons couple. Today the room can still accommodate a crowd, while a cozy nook beside a bay window offers comfortable dining for just a few. At night, a Waterford chandelier and mounted wall sconces create a warm ambience, increasing the open, yet intimate feeling of the space.

The focal point of the dining room is a carved stone and wood mantle, above which hangs an oil painting by French artist Monnoyer. Forrest explains that the flowers, painted in deep, saturated tones, indicate the aristocratic standing of the subject. Other interest points in the dining room include faux marble medallions under the bay window, faux marble baseboards, and decorative over-door panels – all additional works crafted by Italian artisan Juliano.

The kitchen is just through a butler’s pantry. “Everything you see in this room is original to the house, which is a testimony to what a quality kitchen should look like in 50 or 60 years,” Penny explains. “It’s a French provincial kitchen through and through.”

While the room’s original brown cabinetry is now painted in a fresh off-white and its hardware has been polished for a modern sheen, much of the other features remain unchanged. Solid brass billiard lights, original to the home, feature small white shades – a bright, crisp complement to the room’s abundant natural light. A kitchen table at the center was transformed into an island by adding height at the bottom. “This room is definitely the heart of the house,” says Penny. “It has so much intimacy and warmth. It’s a true French cook’s kitchen.”

In the opposite wing of the house, what once was two master suites has been re-imagined into one master suite and an additional sitting room.

The master bedroom has an airy, effortless elegance. Crisp white bedding pops against rich wood tones of the four-poster bed, and patterned textiles add a feminine touch. A sense of openness and light continues into the walk-in closet and bathroom, in which streams of warm light filter through multiple windows.

The adjacent sitting room maintains the home’s French theme. Once covered in black and white ticking fabric, the room is now painted in a coat of creamy yellow for a fresher, lighter look and feel. Overhead is the original arched ceiling, designed to mimic Napoleon’s tented bed.

From the sitting room, clear sightlines to the opposite end of the house are created when all interior doors are left open. Forrest explains that sightlines like these were characteristic of 17th century French homes; it allowed women to parade from their bedroom to the dining room for a grand entrance.

Today, the Simmons appreciate this feature for a different reason: it offers a chance to enjoy the home’s scenic vistas. “Fran used to say her favorite thing to do every morning was to walk from her bedroom to the kitchen, as every single room had a different view,” says Penny. “It was one of the most beautiful strolls you could take.” “It’s like living in a jewel box and she never lost appreciation for it.”